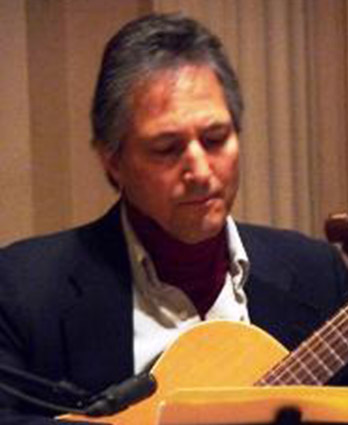 Academic Educational Background
Samuel Guarnaccia, a Vermont native, studied classical guitar in Spain and has performed throughout parts of Europe and North America. He has taught at The University of Denver, Lamont School of Music, Middlebury College, and the University of Vermont a Spanish scholar, player, and composer with deep ties to the history, traditions, and spirituality of ancient and contemporary Indigenous peoples. Sam composed the music for A Celtic Mass for Peace: Songs for the Earth (lyrics by Philip Newell), and is currently writing the music for a major new work, the EarthPeace Oratorio in permitted artistic collaboration with Wendell Berry, Bill McKibben, Thomas Berry, John Philip Newell, and other voices of the new ‘spiritual ecology’ of planetary consciousness for Peace, for the ‘survival of creation’ and healing of the Earth community.

Professional Experiences in Peacebuilding / Community Building
Sam has worked, and is working closely in creative peace-related projects with the National Peace Academy (a co-facilitator, edulearner  in the 2010 PPI), The Rasur Foundation, inaugurated in Costa Rica, now expanding Peace education in public schools in the US, composing children’s songs for the school curriculum, and the BePeace Anthem which will be recorded in audio and documentary form for national distribution in September, 2011. His work with university students as a Spanish language teacher, scholar, and educator, entailed deep engagement with the social, cultural, and economic struggles in Latin America, with ‘liberation theology’ and the crucial role of ‘spiritual’ traditions and institutions in the struggle to understand and restore ‘right relationships’ of marginalized peoples with their earth, culture, and country. Central in this struggle, is the powerful role and potential of the arts in informing, raising consciousness, and increasing the inner and outer capacities of individuals, groups, and institutions in understanding the need for and creating ‘right relationships’ in all spheres of life on and with the Earth.